FANUC controls are capable of performing amazing tasks.  These controls can execute part programs to cut parts to exacting precision while, at the same time, keeping track of  tool changers, safety devices, hundreds of I/O points and an untold number of switches.  However, no control can perform these operations on its own.  They require information from the outside world, executive software to 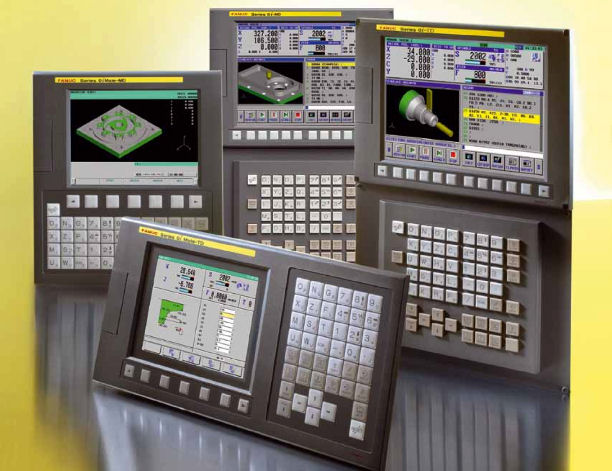 run the control, hundreds of Parameters, and NC programs.  Communications is a catchall term to describe the various ways this information is sent to, and received from, the FANUC control.

Beginning with the very first CNC, there has always been a need to transfer information to and from a control.  Over the years, although the general type of information has not greatly changed, the methods used to communicate this information have changed and improved greatly.  Initially, NC programs were fed into a control using punched paper tape.  After the demise of paper tape readers, most CNC data was communicated through a wired serial (RS-232) port. Although serial connectivity is still used extensively in many manufacturing sites, newer communication methods are being employed, including wireless serial, Ethernet, HSSB, and solid-state media, including USB.

Outlined below are the various types of information which can be accessed and updated in a FANUC CNC control:

Part Programs (including subprograms and macro programs)
NC programs, containing specific code for part geometry, comprise the data most commonly communicated to a control.  Typically, NC programs are saved in the control memory as they are being received from an outside source.  After all required programs have been stored in control memory, the machine is then ready to run.  The machine may be run using just one program or, in many cases, a “main” program is used to call other subprograms and macro programs.

It is also possible for a control to run a part program while it is being received from an outside source.  This method of feeding a program, called drip-feeding, has some limitations since it does not support programs containing certain macro programming statements, such as GOTOs or DO loops.  Statements in a drip-feed  NC program can only be executed sequentially, with no interruption or change in flow.

NC programs can also be sent by the control back to a remote device, such as a personal computer (PC).  Using DNC software, the PC is used to store programs that are sent to, and received from, one or multiple machine controls.  If an operator has the ability to edit programs on the control, he can also send a revised program back to the PC so that it can be stored for subsequent use on the same or similar machines.

Control Data (including macro variables, tool and work offsets, and fixture offsets)
Control data changes can be made directly on the control or can be sent to the control using a special NC program format.  As the data is received, the control updates the settings.  This data can also be written from the control to an external device.  Typically, this is done to backup the control data so that they can be restored in case of a problem with the control.

Production Information
Many manufacturers track machine efficiencies in an effort to reduce down time and increase productivity.  Using various methods, it is possible to monitor certain events as they occur on the machine and create report logs.  These logs can then be made available in printed form or through on-line applications, giving management a ‘real time’ view of the machine status.

Examples of status information that can be captured include:

Data Output from Control for Backup Security Purposes
Backup of general machine information should be performed on a regular basis.  Should anything ever happen to the control, these backup files can be used to return the control to its condition as of the last backup.  This will, obviously, save significant time in returning the control to an operational state, and, consequentially, reduce the cost associated with machine ‘down time’.

Information that can be backed up includes:

Control “Programs”
FANUC control executive software, comparable to the Windows operating system on a PC,  is designed for the specific control.  Although this should never require modifications, it is possible to add an executive module to a control to support a new option.  The new module must be obtained from FANUC and should only be installed by a qualified engineer.

Other control “programs” such as PMC ladder programs, and, optionally, macro executor software. are usually created by the machine tool builder, or retrofitter, and should not require changes unless functionality is being added to the machine.  These types of changes are usually handled by the OEM or a machine maintenance department.

However, the ladder program and parameters (both NC and PMC parameters) can be changed on the control with the appropriate security privileges.  Once changed, they should be backed up to an off-line medium for security purposes.  If the control ever has a major problem and needs to be “rebuilt”, these off-line files can be used to restore the control to its original state.

Communication Methods
There are various methods that can be used to transfer the above-mentioned information to and from the control.  The method that is selected is usually based on the options (both hardware and software) that are available on the control, as well as the machine tool user’s environment.  Because there are so many options, the user should be able to configure the one(s) that most aptly fit their environment. 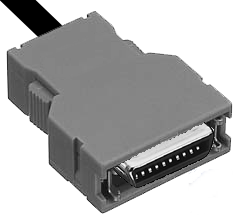 As previously stated, serial communication is a common method used to communicate with a control.  It is relatively low-cost and is broadly supported by many third-party hardware and software packages, including all FANUC controls.

Serial (RS-232) software is relatively simple and straightforward.  The settings between the two communicating devices must match and they must be connected via an acceptable serial cable or wireless connection.  Then it is a simple matter of coordinating a request for data to or from the CNC control.  Generally, the operator is the one to initiate the transfer of information by using functions that are built in to the FANUC control.

PCMCIA Flash Cards
Available on most FANUC i-series controls, the PCMCIA card slot allows the use of a low-cost flash memory card.  Just about any data in the control can be read from or written to this card.  This makes 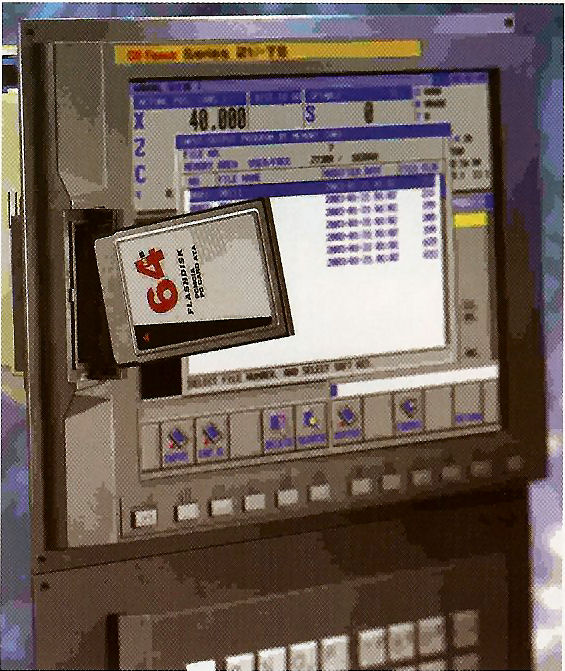 PCMCIA flash cards a perfect medium for writing the entire contents of the control to one device and saving it in a secure place.  If a back-up is performed whenever changes are made to the control, this flash card can be used to restore a compromised control to working order.

Also, because of the availability of large capacity cards, they can be used to store part programs which can then be drip-fed to the control (although with the same limitations as those for serial drip-feeding).

Enhanced Flash support for 30i-series and 0i-D controls
Today’s 30i series and 0i-D controls offer a compact flash memory card port.  With the use of an adapter, a compact flash card can be inserted into this port (and the cover can be closed to conceal/protect the card).  This card can then be configured as an extension of the control’s CNC memory.  Part programs can be stored, and edited, on the card and the programs can be accessed by the control as if they reside in ‘normal’ NC memory.  It would be possible, therefore, to insert a different card for each part, or group of parts, to be processed on the machine.  A library of these cards could provide all of the programs necessary to run any part.

Ethernet Connectivity
Ethernet is an industry-standard connectivity method used for most local area network connections in business and home.  FANUC provides an Ethernet connection on most of its i-series of controls. 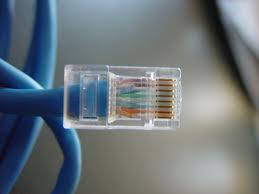 Originally, the embedded Ethernet port, offered on all controls, was of a slower speed (10Mbps).  Therefore, FANUC offered a faster Ethernet option (100Mbps) for those controls. Although the slower speed was capable of supporting most data-collection functions, fast Ethernet made a difference for functions that were considered time-critical.  FANUC’s newest controls will now offer the 100Mbps Ethernet connection as a standard.

Assuming that the PC is Ethernet-ready, no additional hardware is required to utilize the Ethernet connectivity.

All FANUC controls with Ethernet capability support FTP (File Transfer Protocol).  FTP allows a control to connect to a PC running FTP server software and provides access to NC programs located on that PC or, optionally, a company LAN.  From the FANUC control, an operator can browse the programs located on the remote device(s) and load those programs to the control memory.  It is also possible to send programs from the control back to the remote device.  FTP server software is readily available from third-party vendors and must be run on the PC to communicate with the control.

The Focus2 option allows additional applications, running on a PC, to communicate with the FANUC control. These applications include FANUC CNC Screen Display, which emulates the control’s display, 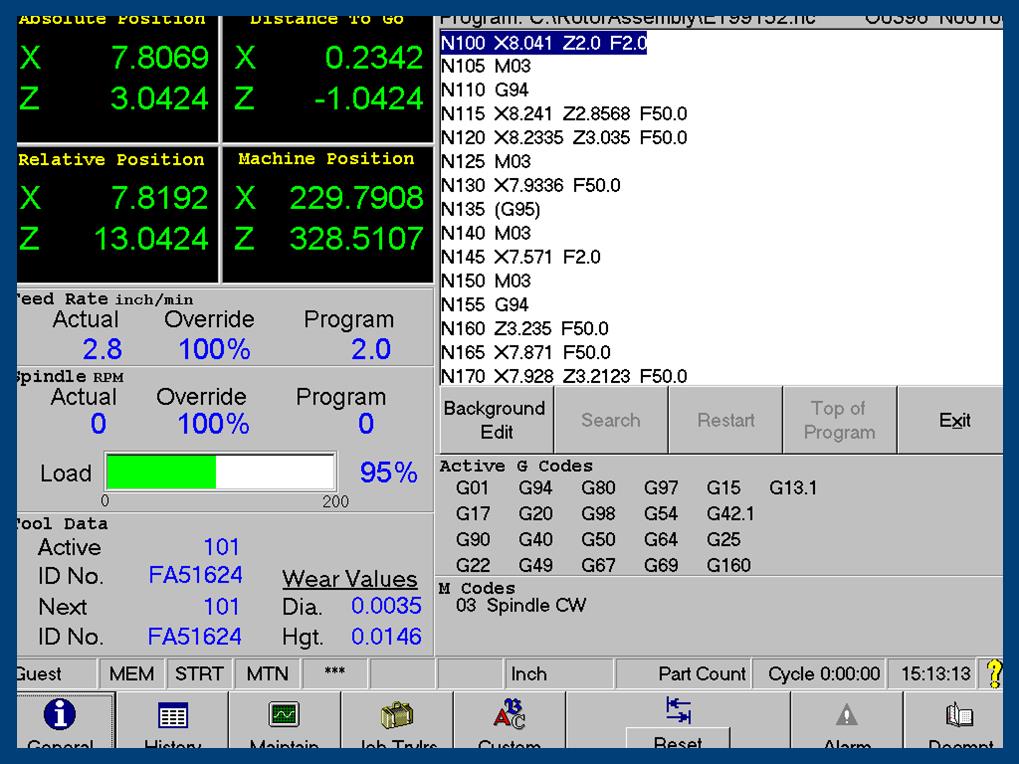 and their Ladder Editing Package, which allows editing of the PMC ladder and parameters.  Other types of custom applications can be developed; examples  include Open Vision™ HMI from CNC Engineering, Inc. and machine monitoring software.

HSSB (High-Speed Serial Bus)
Since the introduction of the FANUC B series of controls, FANUC has supported this proprietary, open-architecture method of communication.  A FANUC HSSB card must be installed in both the control and in the PC which will be communicating with the control.  The PC-side HSSB card can be either a one-channel card (for connecting to one control), 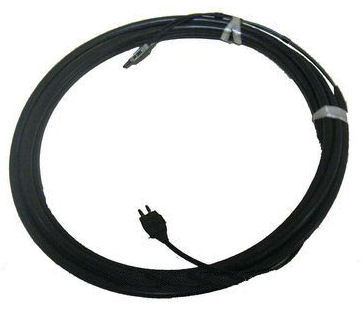 or a two-channel card, capable of connecting to two controls.  It is possible, in fact, to install two cards in one PC so that, with two two-channel cards, one PC is capable of connecting to four FANUC controls at one time.  However, each control can be connected to just one PC.  The connection between the control and PC uses a proprietary fiber-optic cable, which offers advantages in noise-elimination from outside sources.

Applications that can be used with the HSSB connection are the same as those available for Ethernet.  As with Ethernet, these applications must run on a PC.  CNC Engineering’s Open Vision™ HMI and Open Vision™ Grind are two examples of custom software that make use of this HSSB connectivity.

Don't overlook the importance of backing up the control memory on a regular basis.  Maintaining a current backup of data like NC Parameters, PMC Parameters, Programs, Pitch Error Comp and Offsets can mean the difference between getting a machine back online in one day, rather than one week.