The Four-Plus-One Approach to 5-Axis Machining

The most common form of 5-axis machining is referred to as a four-plus-one configuration.  A CNC with four-plus-one capability allows the programmer to simultaneously machine with any four of the five 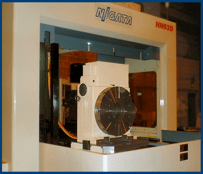 axes.  In a four-plus-one system, one axis must always be idle, but the selected axis can be changed at any point in the program.  For example, the first machining operation may involve the X, Y, Z and A axes and the second machining operation may use the X, Y, A and C axes.  Four-plus-one does not mean that one of the axes is indexing-only.  In a true four-plus-one system, each axis is a full CNC axis with contouring capabilities.

Four-plus-one capable controls include most of the newer Fanuc 0, 18 and 21 series of controls, as well as the 32i-MA model.  These are the most common controls found on vertical machining centers.

While the four-plus-one approach to 5-axis machining is perfectly adequate for the vast majority of work-parts, some machining operations may require full simultaneous 5-axis machining.  Turbine blades 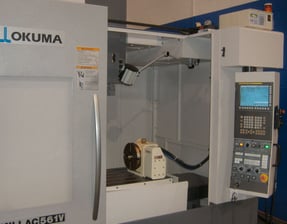 Manufacturers considering a 4th or 4th and 5th axis upgrade to an existing machine should be aware of the limitations found with older FANUC controls, including the 0-M, 0i-MB, 18-MA and 21i-MA controls.  It is possible to interface a two-axis rotary table to these controls, but one axis must be an indexing-only axis.  Typically, the rotary table tilt axis gets this distinction.  An external indexing controller would often control this axis.  Indexing controllers can be set up to index through an M-code signal that simply tells the controller to index to the next pre-programmed position or it maybe possible to have the index command sent via the D-print statement function in the FANUC control.  The D-print statement allows the user the advantage of programming the index move from within the part program.  In this case, the FANUC control sends the index command to the indexing controller through the RS232 port.

Some four-axis controls allow the integration of a Beta I/O axis that, while indexing-only, is a fully integrated axis within the FANUC control.  The position is displayed on the FANUC screen and all FANUC functions apply, such as Jog and MDI functions.  The major limitation to any of these systems is that 5-axis contouring is not possible, and one axis has to be permanently designated as indexing-only.

If a manufacturer needs 5-axis machining capabilities and their CNC does not support 5-axes, they can always consider retrofitting the machine with a new FANUC control and a new rotary table.  This

option may not be practical in all cases, but if the machine tool is mechanically sound, the cost of a 5th axis rotary table and a control upgrade may be an attractive alternative to purchasing a new 5-axis machining center.

Our Probe & Laser Department is Expanding!

We are pleased to announce the newest member of the CNC Engineering team, Elisa Turlo.  Elisa is here to assist all of our customers with the full line of Renishaw products. 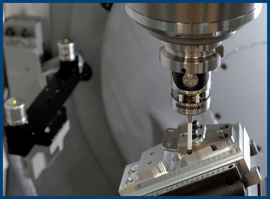 CNC Engineering is the exclusive Renishaw Distributor Integrator (RDI) for the Northeast region, although we offer Renishaw Probing Solutions throughout North America.  Our online Renishaw Parts Locator tool has been updated with the latest Renishaw products, including Machine Tool Probes, Lasers and Styli.

CNC Engineering is retrofitting nine Cincinnati skin mills for Boeing.  Before the retrofits, utilizing FANUC 30i series controls, unplanned downtime had a negative ripple effect on overall plant productivity.  After the retrofit, tests showed that cycle time has been reduced by 56%.