Airlines around the world have placed more than 6,000 orders for Boeing 737s since the jetliner first entered commercial service in 1968, the company’s website says. Of course, the variants in the air today are a far cry from those initial models, but the basic platform remains intact. 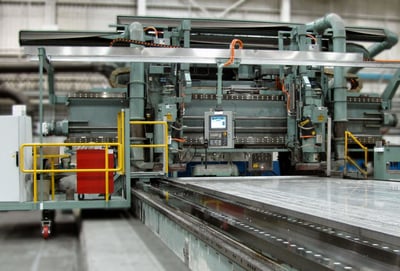 Wing skins for these aircraft are produced on a similarly venerable platform: the Cincinnati bridge-type skin mill, nine of which are housed at Boeing’s manufacturing facility in Auburn, Washington. Unlike the planes themselves, these machines were only recently fitted with the latest technology—in this case, new controls, servo systems, wiring, power tracks, software and more. Installed by retrofit specialist CNC Engineering (Enfield, Connecticut), these additions have improved productivity, decreased maintenance and enhanced operator safety. As a result, Boeing has avoided a substantial capital investment in new machine tools and continued to capitalize on the bedrock features that made these 20-year-old mills a valuable part of the company’s production process in the first place.

These machines also produce wing skins for Boeing’s 777, although the complicated, time-consuming production process is virtually identical for skins used on both planes, the company says. This process had proven adequate for many years. However, as the company began to increase production of both planes, machine downtime became a hindrance to keeping up with demand. The skin mills’ aging control systems had begun to cause issues with maintenance and reliability, and parts for these systems were becoming more difficult to acquire. Moreover, the wiring on the machines’ 150-foot-long X-axis power tracks was also deteriorating, as were their limit switches.

In addition to addressing these problems, the company wanted to improve the machines’ productivity and enhance operator safety. This would require a substantial overhaul, so the company turned CNC Engineering, which specializes in such work. To replace the aging control and servo systems, the retrofit provider recommended Fanuc 30i-AM CNCs with new Alpha I servos. It also replaced the Allen Bradley spindle drives to improve machine uptime. Next, the company installed a newer, simpler, X-axis power track in each machine, complete with replacements for all associated wires and utilities. It also replaced the wiring on the rest of the machines along with all the aging limit switches.

The fact that each machines’ twin spindle heads share a common Y axis also caused downtime because of the potential for collisions. To address this issue, CNC Engineering developed custom software that monitors the positions of both heads. If a collision is imminent, the software stops the heads and issues an alarm.

These steps would go a long way toward reducing machine downtime, but Boeing also wanted to improve productivity. One factor holding the machines back was the design of their operator’s pendants. Although the pendant could travel across the entire bed, it was small and had limited functionality. As a result, operators had only limited control of the machine while setting up parts or working on the spindles. CNC Engineering solved the problem by building large, supporting masts that enable each operator’s station to travel across the entire machine bed. According to Boeing, the result is faster, more efficient setups.

Additionally, operators riding in the newly mobile stations now have access to a series of custom screens that display only information pertinent to the wing skin manufacturing process. According to Boeing, consolidating this information into just a few screens has reduced setup time and made the machines easier to run. Enhancements to the machines’ X and Z axes have also improved productivity. Replacing their 1,500-rpm X-axis servomotors with Fanuc Alpha 40S, 3,000-rpm motors doubled axis speed (from 300 to 600 ipm) while still leaving plenty of power for wing skin machining. As for the machines’ Z axes, adding linear scales boosted accuracy by a factor of two.

Machining the wing skins requires the use of shell mills as large as 12 inches in diameter, and each cutter is covered by a shroud that contains the chips for collection by an attached vacuum. In the past, the shroud could travel only up and down via a hydraulic cylinder with fixed stops. Replacing the hydraulic cylinder with a servo actuator and separate servomotor has enabled the shroud height to be controlled through part program commands. As a result, operators can decrease cycle time by positioning the shroud in a way that improves chip evacuation and minimizes wear on the shroud material.

Previously, one particularly time-consuming and error-prone part of the wing skin production process was manually stamping a tab in each skin with part identification data. To automate this operation, reduce errors and improve safety, CNC Engineering developed a PC-based tab engraving application that enables the operator to scan barcode information into the CNC. A coordinate rotation function enables engraving at any angle, while a mirror image function enables engraving with the second spindle.

The retrofit company also equipped each machine’s two spindles with its own Renishaw RMP60 radio transmission part probe. It also developed custom software to enable the left spindle head to probe the part in a mirror-image configuration to check hole position and tolerance. The probes can also be used to set work coordinates and check the gantry bed for flatness irregularities. 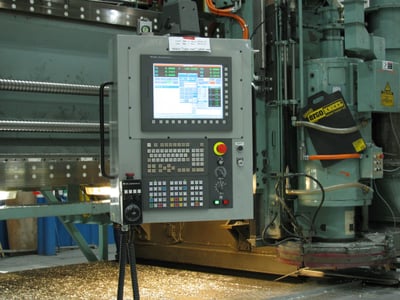 Finally, adding spindle speed detectors has improved safety by verifying when the spindles are stopped so operators can replace tools or perform other work. Also, replacing the newly mobile operator’s platforms with larger units has provided more room to work safely, while supporting them with dual walking beam prevents vibrations from transferring to the machines. 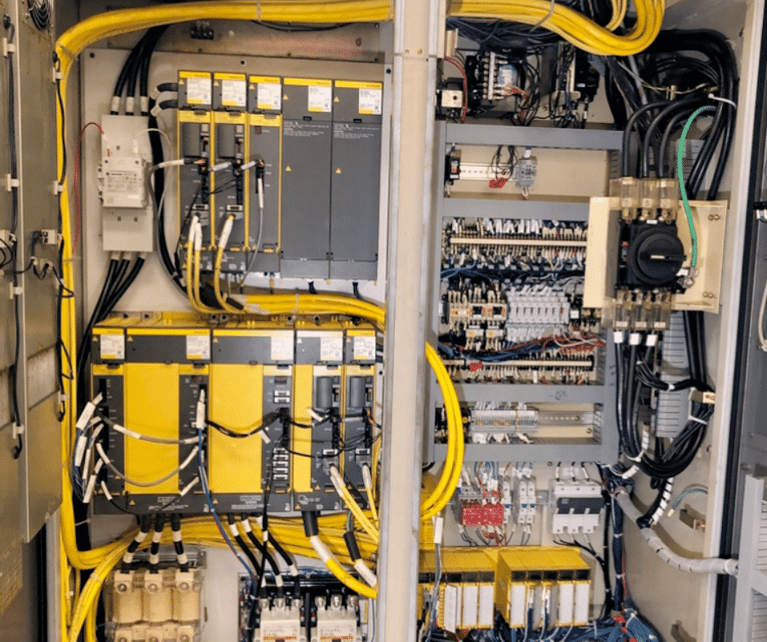 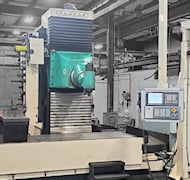